How Did The BP Oil Spill Happen? 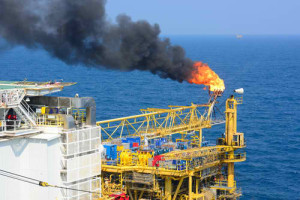 On April 20, 2010, the oil well, which is approximately 5,000 feet beneath the surface, was being sealed in order to prepare it for a subsequent rig to later come and drain the oil. However, while celebrating the closing of the well with several BP managers on deck, a surge of explosive, highly pressurized methane gas came flying up the well and got sucked in to the intake of the diesel engines which power the rig causing them to over-rev and explode. The explosion was so great that solid, three inch thick, fire rated steel doors ripped away from the six steel hinges supporting them. Within minutes several other explosions erupted and before long the entire deck was ablaze. Two days later the rig, Deepwater Horizon, owned by Transocean, leased and operated by BP with critical support subcontracted from Halliburton, sunk to the bottom of the Gulf.

The initial reports revealed a few main culprits. A part of the blow out preventer (BOP) called the “annular,” which is a rubber gasket used to seal the well, was damaged weeks before when someone moved the shaft while the annular was engaged causing it to rip to pieces. The crew reported large chucks of rubber coming up in the “mud” but upon reporting it to management, were told that everything was fine and to keep drilling. “Mud” is man-made drilling fluid pumped down the well and back up the sides in continuous circulation. The sheer weight of it keeps the oil and gas down and the well under control.

In addition to the blow out preventer’s main sealing mechanism, the annular being damaged, there is evidence that one of the two control units to the blow out preventer also wasn’t working properly, that there was a hydraulic fluid leak and a weak battery; all of which BP and others knew about. But their greed and negligence didn’t allow them to stop there.

In finishing the well, the plan was to have the subcontractor, Halliburton, place three concrete plugs at various depths in the column. The plugs are a further safety mechanism to prevent gas and oil from exploding up due to the tremendous pressure. The Transocean manager wanted to do this with the column full of “mud” to keep the pressure contained. However, the BP manager wanted to begin to remove the “mud” before the last plug was set. This would dangerously reduce the pressure controlling the well before the plugs were finished but it would make the process much faster saving BP valuable time and money.

This was so easily preventable if only the “mud” had been left in the pipe; or if only the annular and control module on the BOP was repaired prior to continuing; or if only the plugs had been set correctly; and if only anyone would have just stepped up to make sure drilling was stopped so that any or all of the above could have been done, none of this would have happened. In the end, the drilling fluid was removed before the last plug was set, the bottom plug failed, the blowout preventer and annular didn’t work. Couple that with the failure to have in place an adequate disaster plan and a failure to adequately mitigate the damage even in the absence of a well thought out plan and the result is that the oil spill is the worst man-made environmental disaster in the history of the United States.

If you have suffered a loss of income or have been physically injured due to this disaster, please call or contact us today. The personal injury lawyers at Rosen & Ohr, P.A. are experienced, dedicated to this cause and ready to serve you!

I am very pragmatic, and spent a great deal of time researching all of the local law firms, before choosing Ronald Rosen and Jerrad Ohr as my attorneys. I wanted …